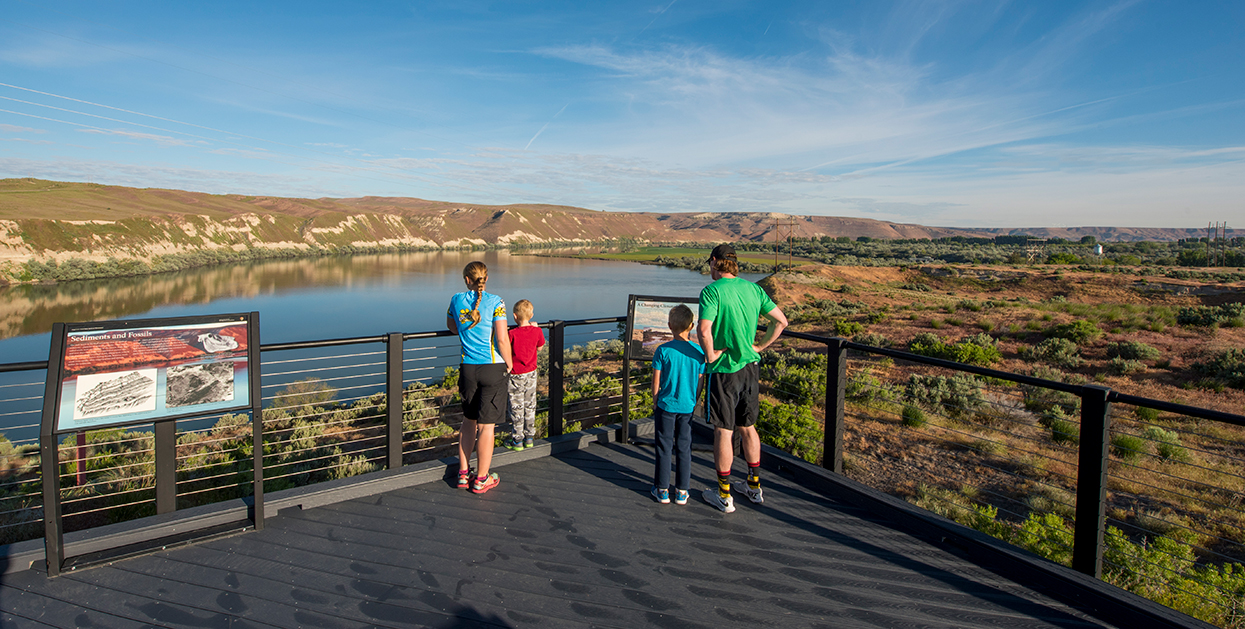 Did you know horses evolved in North America?  The Hagerman Horse, Equus simplicidens, was the first true horse but its bones most closely resembled Grevy’s zebra bones.

Hagerman is home to over two hundred different species of fossil plants and animals: including sabertooth cat, mastodon, bear, camel, ground sloth, and many other species.  Over 3,000 new fossil fragments are found each year. 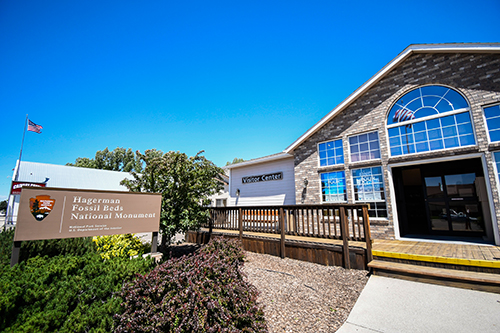 Winter Hours: Beginning October 5th the Visitor Center will be closed every Tuesday and Wednesday until June 4th.

Please check back before you visit as schedules may change.

The Visitor Center is open all Federal Holidays except for Thanksgiving, Christmas (12/24 -25), and New Years Day. We will be closed on these days.

Participants choose from a variety of activities to earn their Junior Ranger badge. You can take a short hike, visit the Monument on the self-guided auto tour, or search the Visitor Center for the correct answers. No matter which activity you choose, you are sure to have fun learning about Hagerman Fossil Beds National Monument.

Junior Ranger booklets are available for free at the Hagerman Fossil Beds Visitor Center. The activities take about 1 – 2 hours to complete. Be sure to stop by, see the Hagerman Horse fossil, and become a Junior Ranger!

Every Forth Grader In a Park

If you are a fourth grader, or age equivalent free-choice learner, you and your family can receive an Every Kid in a Park pass that will give you free access to hundreds of parks, lands, and waters for an entire year.

Help us celebrate the National Park Service birthday as we turn 100 years old in 2016! We want everyone to learn about national parks, but this is a special opportunity for fourth graders to act as important ambassadors.

If you are 10 years old or in fourth grade, you can participate in a fun online activity and receive a voucher for a free 4th Grade Annual Pass. Print out the voucher and take it with you and your family to a national park, where you can serve as an ambassador and introduce your family to the National Park System. This program, called Every Kid in a Park, begins September 1, 2015, and runs until August 30, 2016. National parks and other federal lands and waters all across America are excited to share their heritage with young people.

We look forward to welcoming you!

What is there to do?

Out on the Monument, the family can hike along the Emigrant Trail and pretend they’re one of the many people who walked over 1,300 miles so far on this trek west. Or walk along the Oregon Trail and check out the wagon ruts left so many years ago. You’re sure to find plenty of fun things to do and see.

Officials from Kenya Wildlife Service (KWS) and National Museums of Kenya and the U.S. National Park Service (NPS) signed a Sister Park Agreement between Sibiloi National Park in Northern Kenya and Hagerman Fossil Beds National Monument in the United States on June 27. The alliance joins together the Kenya Wildlife Service, National Museums of Kenya, and U.S. National Park Service, and is the first of its kind between the United States and any African country. The five year agreement between the sister parks will increase information sharing and direct park-to-park contacts to address issues the parks share in common. Both parks are known for their important terrestrial paleontological localities and have produced fossils that represent a large diversity of species.

“These two sites have significant fossils, history, and current-day resources,” said Geniac. “Research in both locations is helping the world to understanding past climate fluctuations and species’ responses, something that may help us address the world’s future.”

“We are happy to be associated with U.S. National Park Service for this historic signing of the sister parks relationship between Sibiloi National and Hagerman,” Deputy Director Wanyonyi said. “The Sister Parks Agreement we are signing today will go a long way in strengthening relationships between Kenya Wildlife Service and U.S. National Parks Service and reaffirms our commitment to conserve the last great species and places for posterity.”

Part of the reason for the Sister Parks initiative is sharing paleontological research between the two countries. Hagerman and Sibiloi dig sites are around the same period in the fossil record and include some of the same species of extinct animals and plants. The parks will exchange technical and professional knowledge, collaborate, and share experiences. Shared information may include best practices and advancements in park management, customer service, conservation, data collection techniques, and tourism development.

Hagerman Fossil Beds, located in the Hagerman Valley of south central Idaho, is site to one of the world’s richest fossil deposits from the early to middle Pliocene epoch. Hagerman’s fossils come from a largely continuous, undisturbed stratigraphic record that spans approximately one million years and provides data applicable for modeling present and future climatic and environmental change and ecosystem response at the local and global level.

It is best known for its preservation of several hundred individuals of Equus simplicidens, which is the earliest example of the modern horse genus. Over 60,000 specimens are housed in collection facilities on-site with additional specimens at museums across the United States and around the world.

Sibiloi National Park is on the northeastern shore of Lake Turkana in Northern Kenya approximately 800 kilometers from Nairobi. The fossiliferous Koobi Fora region contains sites of paleontological and paleoanthropological significance with over ten thousand fossils, including hominid fossils, recovered.The area is called the “cradle of mankind” for the early hominid skeletons unearthed there such as Turkana Boy (Homo erectus).

Sibiloi’s fossils provide an opportunity to trace the evolution of numerous mammalian lineages back in time and to study the effects of climate change and human activity on local fauna. Sibiloi is also known for its Petrified Forest which draws tourists from around the world.

For more information about Sibiloi, visit them at: http://www.sibiloi.com/or: http://www.kws.go.ke/content/sibiloi-national-park

For more information about Sister Parks, visit them at: http://www.nps.gov/oia